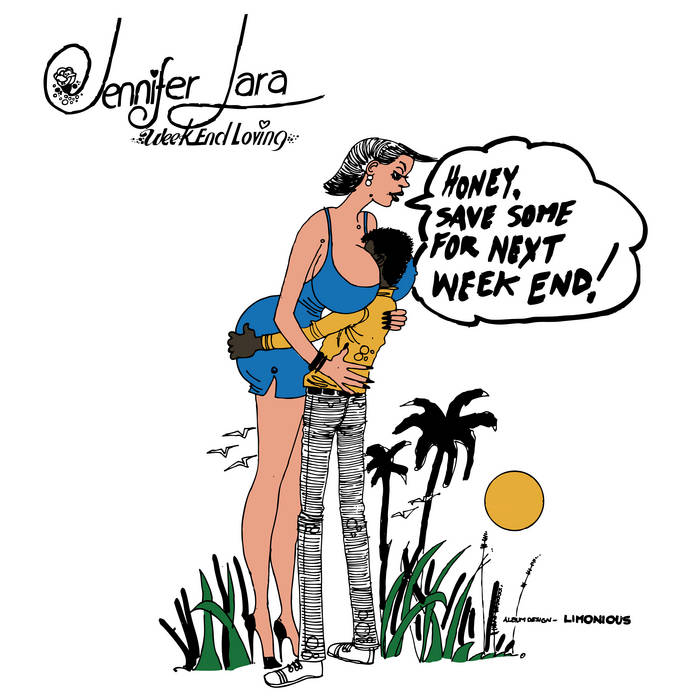 ‘Weekend Loving’ from Jennifer Lara is a perfect blend of boogie funk, roots reggae and lovers rock. Produced by Black Solidarity records in 1985, this album is a masterpiece from the Studio One princess. Recorded at Tuff Gong and Music Mountain studios in Jamaica, the rhythm tracks are played by some of the best musicians from the island in the sun: Lincoln ‘Style’ Scott (Drum), Errol ‘Flabba’ Holt (Bass), Robbye Lyn (Piano & Synthetiser), Dean Frazer & Ronald ‘Nambo’ Robinson (Horns). This reissue was carefully remastered from Black Solidarity master tape, now presented as a double LP 45 rpm DJ friendly edition. The original Limonious artwork was reloaded and a bonus track was added to complete the set: ’In My Time’, an obscure slow synth groove, full of hope and melancholy.

Jennifer Lara was first taken to Studio One in 1969 by keyboardist Richard Ace, who was a session musician here. She never left the Studio One family and became resident harmonist. She added backing vocals to the songs of some of the camp’s biggest names, including Delroy Wilson, Freddie McGregor, Dennis Brown and Sugar Minott. In 1974, Jennifer Lara recorded her debut album with Coxsone Dodd at Studio One in Brentford Road. The results of the sessions appeared on ‘Studio One Presents Jennifer Lara’, which was an instant success. Jennifer Lara was one of Clement 'Coxsone' Dodd’s protégés. On may, the fourth of 2004 at Brentford Road, she was there when Coxsone got a heart attack, so she tried mouth-to-mouth resuscitation. One year after, she died at the Kingston Public Hospital. She is survived by two children, daughter Ika and son Cheka. Jennifer Lara was a very likeable person, got on with everyone. She was involved in many benefit concerts to help to poor and the needy in Jamaica. May your soul rest in peace, we love you Jennifer.