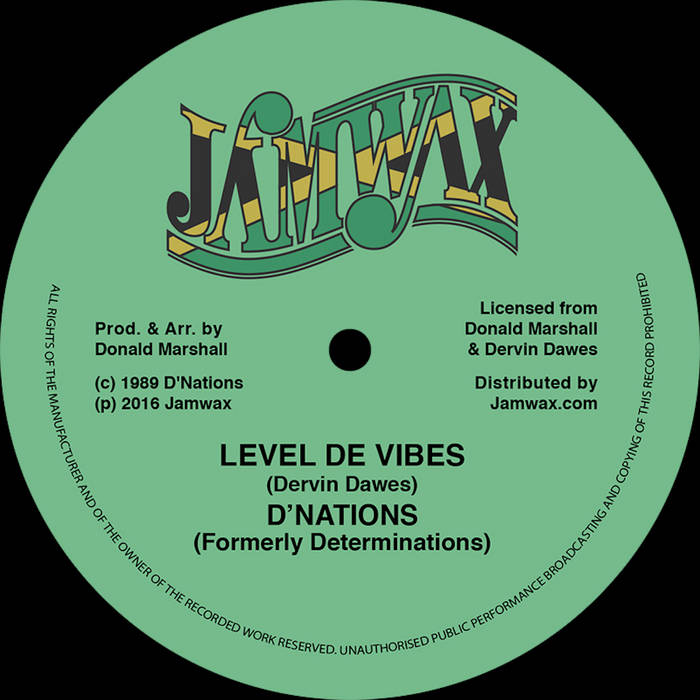 It was July, 26 of 1979, Donald Marshall, Dervin Dawes and Anthony Hill (Ringo Paul) formed and complete the legendary Determinations helped by The Meditations (Ansel Cridland, Danny Clarke and Winston Watson). The established group with their hit song “Woman Is Like A Shadow” teach them how to improve the quality harmonization between lead vocal and backing vocal in order to develop a better sound for the group.

Dervin Dawes’s father see musical potential in him and get him an electric guitar, a speaker box and a microphone while Donald Marshall get a keyboards. The Determinations had shows on Delissa Avenue with Donald Dennis (bass, guitar, keyboards), Nathan Notice (guitar, bass), Dervin Dawes (guitar, bass, vocal), Donald Marshall (keyboards and vocal), Anthony “Ringo Paul” Hill (vocal) and Admiral Bailey (drummer) before he get really established as a music DJ in the business. The musical inspiration came from Donald Dennis (who father was from the Legendary Sugar Belly Band). He used to keep all the instruments in his house after every show. Donald Dennis could play all father instruments and that how the rest of the group learn to play music. Most of thoses musicians founded later one of the most famous backing band from Jamaica: Fire House Crew.

The Determinations were advised to meet the producer named Bunny Hylton, an english producer, at the Channel 1 Records Studio on Maxfield Avenue, Kingston, where he was looking for new talented upcoming artists. At that time, Channel 1 was a top studio for all the Jamaican artists. Bunny Hylton said to the group let’s go inside and get the two riddims made with the musician he booked for his studio session. The group wrote and recorded two songs named “I’m Not Good At Proposing” and “See Me In The Park”, released late 1979 in England on Kingjam label. After this session, Bunny Hylton suggested to the group that he will voice at a different recording studio in two days. So The Determinations met again Bunny Hylton at the “Harry J. Recording Studio” on the “Roosevelt Avenue in Kingston. At that time Anthony Hill providing the lead vocal while Dervin Dawes and Donald Marshall doing the background harmonies. Bunny Hylton went back to London where he released the songs on his Kingjam label. In the early 1980’s, The Determinations travelled back to Channel 1 Recording Studio where they met producer Henry “Junjo” Lawes who was the big number one producer in Jamaica at that time. The group recorded two more songs with him. Donald Marshall and Dervin Dawes also auditioned with the legendary Bob Marley at the Tuff Gong studio, Peter Tosh, Earl “Chinna” Smith, Derrick Harriott and Linval Thompson.

In 1984, The Determinations link up with Jamaica dub poetry Oku Onuora who was impressed with their music style and vibes. He decided immediately to work with them on his upcoming album “Pressure Drop” with Dervin Dawes and Donald Marshall doing the background vocals for songs like “Echo”, “Dread Time”, “Pressure Drop”, “Sketches”, “Heathen Let Wi-Go” and other songs that were all recorded at Tuff Gong Recording Studio on 56 Hope Road, Kingston. The group went on to do a music tour with Oku Onuora promoting the “Pressure Drop” album all over Jamaica. After music touring with The Determinations, Oku Onuora decided to voice Donald Marshall and Dervin Dawes. He booked some studio time at King Tubby’s studio in Water House, Kingston 11 and at Tuff Gong studio.

In 1989, the biggest thing was “Level De Vibes” song. The Fire House Crew band was composed by Donald Dennis (bass), George Miller (drum), Rass Raddy & Dervin Dawes (guitar), Nathan Notice (keyboards), Peter Flute & Paul Crossdale (keyboards). They build and recorded the “Level De Vibes” riddim at legendary Music Works studio owned by Gussie Clarke. The song was voiced and mixed at Creative Sound studio on Mountain View Avenue, Kingston. Mikey Carroll was the master engineer who also did an excellent mixing. “Level De Vibes” is Dervin Dawes’s first song about his life story. His wife left him because he lost his 9 to 5 job “now the money down the girl ah say mi no ready”. He is the lead vocalist on the song while Donald Marshall did the backing vocals. Donald Marshall made a call to Bunny Hylton in London to propose him to release the song on his Kingjam label. Bunny Hylton accepted and brought the song to Jet Star to get a distribution deal. He suggested to The Determinations that they need to change their group name cause too many different reggae groups and bands have the same name. So the group decided to come up with a new name. They renamed the group D'Nations (Formerly Determinations). In 1990, they finally decided to produce themselves their own music. So Donald Marshall contacted Bunny Hylton and asked his permission to used his label Kingjam to release “Just Say No”. Then Bunny Hylton and Donald Marshall worked together to release songs from Lukie D, Wayne Lonesome and Garfield McLean from The Untouchables.

D’Nations say that music is the force of the Universe and reggae music is very spiritual. Reggae in Jamaica has come a very long way and they feel that music can change the world. You have all types of people listening to the same music and say to each other, come let us join hands, saying music is love and we all are surrounded by it all the time. Donald Marshall is a strong believer in God and a lover of music, art and drama. Anthony Hill adores music, football, dancing and going to stage shows, while Dervin Dawes loves arts, music, carving and painting. D’Nations are very happy the reissue is now available on the market for the fans who never get their copy “It’s a big success”. They still working hard to keep their name and music going for their fans “Level De Vibes !”.