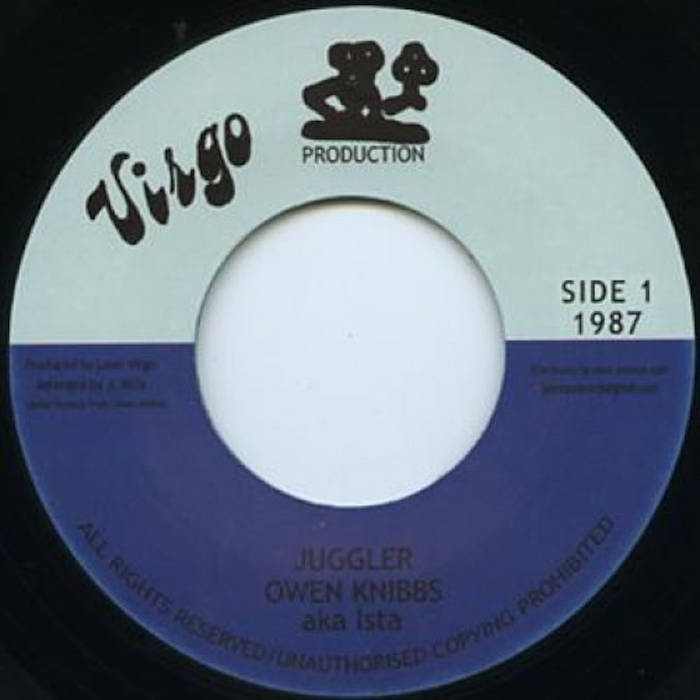 Owen Knibbs was born november, 10th 1966 in Mt Salem, Montego Bay, Jamaica. He grew up with his mother (mama granty), three sisters and nine brothers, Owen was the youngest. He was introduce to music at a tender age by his mother, she would host parties in the back yard every weekend. She own a stereo vinyl player and Owen would play the records for her. Owen study the lyrics of Tinga Stewart “Play The Music”, a festival song in 1974, which became the first song he perform at a talent show and receive one dollar. He started to perform in church and at school and was very popular in the community. While attending St James high school, he met a friend name Martin Reid in nine grade and they became a duo. They call themself “Little Ista and Billy Dread”.

Owen Knibbs wrote his first song about a young tenth grade female teacher. His friends encourage him to sing it for the teacher but he was suspended for a week because the song was kinda sexual. While still in school, one of his classmate elder brother promoted a dance with Owen Knibbs, Early B, Bruck Back and Sister Nancy on one of Montego Bay top sound system “Ghetto International”. Early B like his performance so he invite him to go to Kingston with him. With the respect he has for his mother he told Early B to ask his mother which Early B did but Mama Granty say no. He and Early B kept a close link after that, Owen Knibbs became a regular on the Montego Bay dancehall scene sparing with a DJ name “Jah Brown” who would take him to a lot of dance where he master the art of making up a song on the spot as the selector would play the version and he would chant on the riddim. Around 1982 one of his childhood breathren Leon Virgo who graduate two years before him and went to Kingston was on a visit and heard the cassette playing with him and Early B and though it sounds good, he make a copy and took it back to Kingston.

A few months after Leon Virgo wrote Owen Knibbs a letter to come to Kingston, this would be his first time going to Kingston but as he quote “Mama Granty not gonna stop me this time”. So he went, still very young around 17 years old. He found himself in Arnette garden a section call Havana where Leon introduce him to “Joe Dog”, a friend who knows a lot of producers at the time. While in Arnette garden, he met Eek-A-Mouse, Squidly Ranks and Thriller so he knows he was in the right place. Joe Gog promote a dance with a sound call “Hot Sizzler” with Barrington Levy and squidly and many more DJ from Jungle. Owen Knibbs felt good because he get to sing with Barrington Levy who after the dance told him to keep going. Things were looking promising for him but he ran into problem because he never have any where to stay so one of his friend (Danavan) took him to stay in Havendale where his grand mother live. He was not welcome in the community as people thought he was a rude boy from Jungle and believe he came there to hide out. He was heart broken because he knew he would have to return to Montego Bay and go back to school which he did not plan on doing but not having anywhere to stay he return home very depress and disappointed. He still continue to sing and was now listening to singers like Sugar Minott, Little John, Triston Palmer, Michael Palmer, Junior Delgado, Hugh Mundell, Linval Thompson and his favourite DJs Super Cat and Early B. After owen graduate high school and Leon Virgo got himself better situated, Owen return back to kingston around 1985 to continue his journey.

Two years after Leon decided to go in producing so in september 1987 he produced Owen’s first and only recording on his label Virgo Production. “Juggler”, a song Owen have written in 1982 while he was in school, a song about poor people hustling and working hard to survive. The track was played and arranged by Jimbo and was recorded at Aquarius Studio at Half Way Tree in Kingston. They had a big vision. With not much experience Leon Virgo gave a respectable distributer to distribute the song, which turn out to be a mistake because he only distribute a few hundred copies in Jamaica and would told Leon the song not selling. Another sad news was popular JBC radio selector “Free I” who play the song a Thursday a week after the song was released, was murdered along with Peter Tosh the following Friday. To make matter worst Leon decided not to continue producing music. Frustrated and disappointed Owen went back to Montego Bay.

At the age of around 21 years old, living in the salt spring area of Montego Bay, a place with a bad reputation, Owen got caught up and for a few years, he was in a dark place. A little good news came as a friend from england was playing some cassettes he recorded off the radio stations in London and on one of these cassette Owen heard the “Juggler”. When he told his friend that was him, he did not believe as everyone knew Owen as Ista. On the vinyl record, Leon made a mistake and put Owen’s real name. So to convince his friend he show him his passport and sang it for him. He told Owen the song is big in Europe and if he went over there he would make lot of money. His friend promised when he went back he would send for him. The friend kept his promise and send Owen an invitation letter. But there was a catch, Owen would have to carry a pound of weed. Owen refused the deal and stayed in Mo’Bay.

Around 1993 he went back to live in Kingston and was sparing with up coming DJ Chuckle Berry, hanging around Music Factory studio on Hagley park road. He was ready to go again but soon after he migrated to the USA and came to the Bronx in 1994. A few months after he won a DJ contest at the popular night club call ACT 3, beating nineteen other contestant and receive five hundred dollars. After that he wasnt really inspire to continue performing, so he and a friend started a sound call “Simple One Intl” which they play around the Bronx locally for quite a few years. After living in the Bronx for ten years his journey took him to Connecticut where he met Jah Mikey who own a restaurant and a lounge. Owen would play there every friday night. One night he play the Juggler by mistake and Jah Mikey ask him who sing that song. Owen look at him and smile. When Jah Mikey realise he sang the tune, Jah Mikey told him he should continue recording. With no interest in singing again Owen still continue to select his music but Jah Mikey would not stop pressuring him. So one night he was in Dygon production studio chilling, he decided to record his voice so Jah Mikey would hear that he dont have them vibes again and leave him alone. But something strange happen, it was the first time since 1987 Owen heard his voice on a track and to his surprise it sound good. At that time he and Jah Mikey has just started a program on One Love radio, a locall radio station in the area and he play the song and the listeners love it. With encouragement and financial support from Jah Mikey, he went back into recording and now working with Dygon production, Hi Dawg production, Hazematic production, Interrupt production and Lambsbread.

When Owen was spotted by us, he could not believe that after 29 years a french label wanted to repress the Juggler and make it available to buyers because people were selling it online for as much as 200 euros and all across Europe, Japan and South America. Owen was shocked.

Since the Juggler reissue released in march 2015, Owen Knibbs started to see his journey on the move again. He get to record the Juggler in dupplate style for sound-system in Japan and Europe. He just released his EP “Last Call” with seven tracks available on digital download. Eric from Black-Catalog invited him over Europe on a six weeks tour in april 2016.

A very humble person in a real life and on a mission with his roots rock reggae. When we ask him how he would like people to remember him, his answer is “like how the they remember Junior Delgado, Hugh Mundell and the great Sugar Minott”. You can link up Owen Knibbs on Facebook, Twitter, Instagram, Soundcloud and Youtube. “Now I'm motivated to record all these songs I have written from 1987 till now. Thanks to all my supporters all over the world. The juggler a juggler again…Jah Rastafari !” Owen Knibbs