Ease Up The Pressure 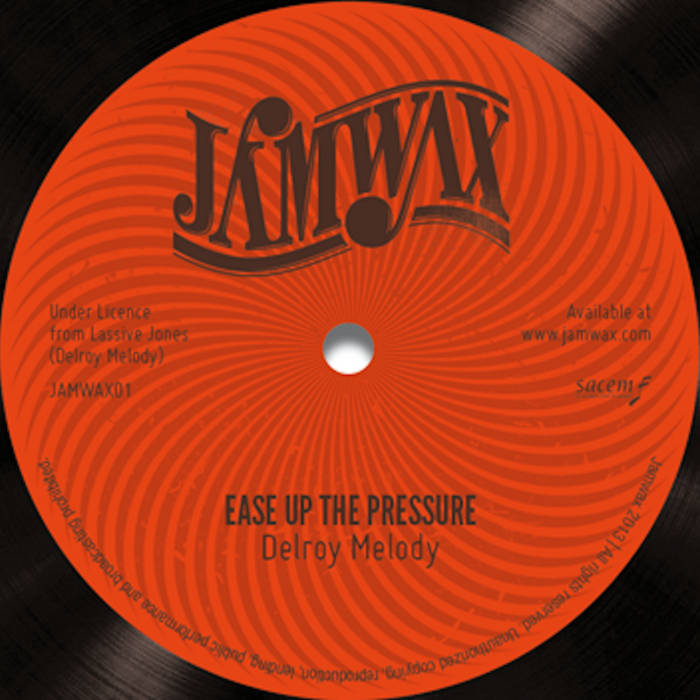 For many jamaican music fans, the name Delroy Melody is unknown, however for connoisseurs and lovers of roots reggae from the 1970's and 1980’s his music includes gems like his album “Dread Must Be Fed” and rare single like “Ease Up The Pressure”.

Delroy Melody (born Lassive Jones on may, 12th of 1954) started his musical education while attending Melrose Primary School and singing on the School Choir with fellow classmates Jacob Miller & Lawrence Weir. One day, Norris Weir (Lawrence Weir’s brother and member of The Jamaicans) suggested that they could put a group together because they sounded good on the choir and Lawrence could play the guitar very well. The group was named The Young Lads.

Junior Byles and The Cables, when they know that The Young Lads were ready, took them to Greenwich Farm where Bunny Lee have audition to find new talent every Sunday. When they reach the yard, it was Slim Smith who was responsible for the studio. When they did their thing, he loved it and he sent us to Bunny Lee to write down their names. The Young Lads went to Bunny Lee and he asked them their name. They told him The Young Lads but Bunny Lee said “there are too much Lads group, you boys are going to school, you boys are School Boys”. That’s how they got the name from Striker Lee. The next Thursday, the group moved to the formidable Treasure Isle Studio where they released “Guilty of Love” and “Oh Tell Me” for Bunny Lee. Jacobs Miller was the lead singer, Delroy Melody and Lawrence Weir the song harmony. Both songs were released in Jamaica on a blank colored wax (one yellow and one green) and one on Uk label Pama. The School Boys went on to record about three more songs for Coxsone but they didn’t hear those songs released in Jamaica.

They continue for about three years singing with bands such as Tommy McCook & the Supersonic, Lyn Tait & The Jets, Sonny Bradshaw Orchestra until Lawrence Weir migrated to the United States. After, Jacob Miller & Delroy Melody decided to do some solo work. Jacob Miller went back to Coxsone to record his first solo single Love Is A Message, which was Guily Of Love.
Delroy Melody was singing with a band called The Mighty Clouds. His musical brethren that time was a singer called Ruddy Mills who sang songs like “Long Story”. One day, Abeng label owner said to Delroy Melody “I hear you sang a song called “Tears” I love it, I want to release it”. Delroy Melody went back to Treasure Isle Studio and recorded his first solo song titled Tears and released on the Abeng label.

In 1978, Delroy Melody met Emperor Marcus with the help of his friend, the number one engineer in the Island Sylvan Morris. Marcus, birth name Winston Martin, has a sound system called Emperor Marcus that used run Papine, Dung Di Hole, Tavern, Hope, Flat & Kentyre. He had artists around him like Brigadier Jerry and Danny Dread. When Marcus heard Delroy Melody for the first time he decided to take up recording and released Miss Brown in 1978. The song got its fair share of support on the air. Delroy Melody can remember one day he was at home and got a call from Alfanso Walker that was the person who was responsible for a program called “Where It’s At”, a TV program on J.B.C. (Jamaica Broadcasting Corporation), at the time it was the only television station. Delroy Melody was called to perform Miss Brown and it was a big thing. So he started to get a lot of calls to do shows all around Jamaica at popular places like Boehema Night Club, Tropics Night Club, Tit-For-Tat Night Club.

Then in 1979 Marcus said “I want an album from you Delroy Melody” so he told Sylvan Morris to get the best set of musicians. Sylvan Morris called Robbie Shakespeare (bass), Style Scott, Sly Dunbar (drums), Bongo Herman (percussion), Willie Lindo (guitar), Bingy Bunny (rhythm guitar), Winston Wright (organ), Bubbler & Gladstone Anderson (piano), The Tamlins & Wellesley Braham (backing vocals) and the dangerous horns trio David Madden, Dean Fraser and Nambo Robinson. The team worked at Harry J studio and the result was a completely timeless roots album with beautiful songs. Dread Must Be Fed song was written by Sly Dunbar. Delroy Melody recorded it for Sly a few years before in 1977 on the Tit-For-Tat label. At that time, Delroy Melody was the lead singer for a group called The Eternals. Marcus, Sly Dunbar and Delroy Melody loved the song so they decided to title the album Dread Must Be Fed.

Marcus wanted an outernational audience for his abum but he didn’t know how to deal with foreign labels. So he asked Leslie Guy, a Bunny Wailer’s family member, that had a very good knowledge of music rights at that time, to manage the album. Marcus gave him the Dread Must Be Fed album master tape and also some recordings he did with Brigadier Jerry. Leslie Guy went to Canada to find a deal and met Humphrey McDonald & Teddy Davis from the Big Mac Soul Power label, located in Toronto. She left the album in Canada and came back to Jamaica without any deal. At the same time, Marcus was arrested for ganja business. Scotland Yard came to Jamaica to seize all his assets. Around 1988 and after seven years in captivity, Marcus came back to Jamaica and realized his album was released in Canada by Big Mac Soul Power. Marcus sent Leslie Guy to Canada to get his royalties. But when she arrived to the adress written on the album (68 Morecabe Gate Plaza), there was no Big Mac Soul Power label. Someone told her the label moved to New-York but her research in the big apple were unsuccessful. Marcus was completely shocked and decided to stop music and forget this album.

Early 1980, Delroy Melody met Ruddy Williams, owner of Black Beauty & Rudwill label. Ruddy have a tape with several heavyweight riddim played by The Studio One Band: Steelie (keyboard), Clevie (guitar), Pablove Black (organ & backing vocals with Delroy Melody), Brownie Brothers (drum), Sly Juice (percussion). The first riddim Delroy Melody heard was Ease Up The Pressure riddim, an adaptation of « Dennis Brown - Easy Take It Easy ». Delroy Melody loved the riddim so he started to write the Ease Up The Pressure lyrics. He was thinking about the bloody political election that happen at the same time in the country. Blood started to flow swifter than the river Nile, as tension rise between JLP and PNP factions. The 1980 general election was marked by over 800 murders. The song was recorded at Harry J studio with Sylvan Morris as engineer. Ease Up The Pressure was played by the PNP cars that travel the whole country to spread their political ideology. On october, 30 of 1980, the JLP won the general election. Ease Up The Pressure was banned from radio station because the song was associated to PNP party.

In 1984, Delroy Melody started to record for Harry Johnson. Harry J asked Delroy Melody to sign an eight years contract to record for him alone. Delroy Melody was so excited that he went ahead and signed. He recorded songs like Buss Shot, Live & Direct, My Lover, which was very good sellers. But after the first year things went sour. He couldn’t sing for nobody else so he took a job to lead sing with a group called Sun Force Band in St. Elizabeth. Since then he sang with Sun Force Band from 1987 at Various hotels all around Jamaica until 1995.

In 2006, Delroy Melody launched his own label: Level Head Production, with his wife Mrs. C. Ford-Jones and his step son Spicylus. They have released “Humble Beginning” and “Dread Must Be Fed” albums on digital download.

"I want to give thanks to Mr. Sylvan Morris, he helped with my career to make me be the singer that I am today I want also to give big thanks to Mr. Corell Hewitt he is building some real rythms for me right now & big up to the Level Head Production team, my wife Mrs. C. Ford-Jones, Spicylus, my publicist Claudine Lloyd & my road team Chris Lyslie & Mikey Jones." Delroy Melody